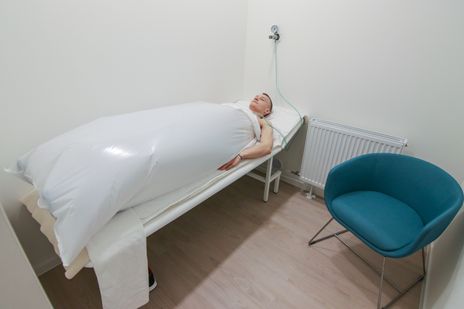 When conducting dry carbon dioxide baths, in contrast to water carbon dioxide baths, direct exposure to carbon dioxide takes place. The human body reacts to carbon dioxide by expanding blood vessels and capillaries, as well as increasing the level of oxygen in the blood. Accordingly, blood pressure decreases and vascular condition improves. The lymphatic system, which is responsible for cleaning the body of toxins, begins to work more actively. Dry carbon baths can also cure a number of diseases. Diabetes mellitus. Expansion of blood vessels improves blood circulation in human muscle tissue. Insulin interacts more actively with its receptors, which leads to a decrease in blood sugar levels. Thrombophlebitis. Under the influence of carbon dioxide, blood viscosity decreases, which is the prevention of various congestion in the blood, and, consequently, the formation of blood clots. Bronchial asthma and chronic bronchitis. In the process of treatment with the help of dry carbon dioxide baths, the appearance of bronchospasm are eliminated, upper respiration is improved. Skin diseases, including psoriasis. Carbon dioxide baths accelerate the healing process, have antiseptic features, help reduce itching.

Top spa hotels in Marianske Lazne for quality of treatment

From 44 € per 1 day full board and treatment

From 55 € per 1 day full board and treatment

From 88 € per 1 day full board and treatment

9,3/10
Show all spa hotels in the city Marianske Lazne

Read all about choosing a spa hotel in Marianske Lazne FAQ